Below are a few samples from the category, Nature & The Environment.
To see the full set of articles, you must become a YourStream subscriber.
1. Australia scientists find 'spooky' spinning object in Milky Way
Australian scientists say the spinning object is unlike anything astronomers have seen before.
Science & Env. (BBC)  < more
5 hrs ago 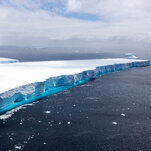 2. An Extraordinary Iceberg Is Gone, but Not Forgotten
A chunk of Antarctic ice that was one of the biggest icebergs ever seen has met its end near South Georgia. Scientists will be studying its effects on the ecosystem around the island for some time.
The Environment (NYT)  < more
8 hrs ago
3. China's zero-COVID strategy: what happens next?
Nature  < more
11 hrs ago