Below are a few samples from the category, 48. News By Region.
To see the full set of articles, you must become a YourStream subscriber. 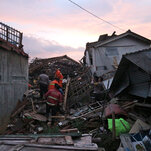 1. Powerful Earthquake Kills Dozens in Indonesia
The quake near the town of Cianjur destroyed hundreds of buildings, and officials expected the death toll of 61 to rise.
Asia Pacific (NYT)
4 hrs ago

2. Russia-Ukraine war live: four 'torture' sites identified in Kherson, says Kyiv; claims over shelling at nuclear plant as UN to inspect site
Officials say they have identified four places where Ukrainians were tortured; Kremlin accuses Ukraine of shelling - which Kyiv deniesAt a glance: what we know on day 271 of the invasion. Ukrainian soldiers fire an artillery at Russian positions near Bakhmut, Donetsk region, Ukraine. Italy's . . .
Europe (The Guard)
5 hrs ago
3. On the Dnipro River at Night, Ukrainian Fighters Ambush Russian Forces
Ukrainian units plying the Dnipro River venture behind enemy lines under the cover of darkness, carrying out reconnaissance and sabotage.
Europe (NYT)
5 hrs ago