Below are a few samples from the category, Politics: Liberal.
To see the full set of articles, you must become a YourStream subscriber.
PEW STUDY: A THIRD OF US CATHOLICS SAY THEIR FAITH STRENGTHENED DURING PANDEMIC
The majority of Americans 68% said the pandemic has not changed their personal faith much, but despite the cancellation of religious activities and in-person services, few Americans only 4% say their religious faith has weakened as a result of the outbreak.
LIGHTEN UP
Pencil Preaching for Thursday, January 28, 2021 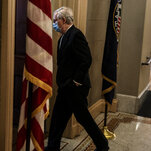 MCCONNELL WAS DONE WITH TRUMP. HIS PARTY SAID NOT SO FAST.
After four years, the minority leader had finally had enough. But with most Republicans rallying around Donald J. Trump, he sided with his colleagues trying to throw out the impeachment case.