Below are a few samples from the source, Art & Design (NYT).
To see the full set of articles, you must become a YourStream subscriber. 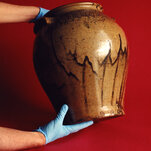 THE ENSLAVED ARTIST WHOSE POTTERY WAS AN ACT OF RESISTANCE
Poetic jars by David Drake are setting records at auction and starring in art museums, showcasing the artistry of enslaved African Americans.
DIVAS' AT THE ARAB WORLD INSTITUTE: SINGERS WHO TOOK CENTER STAGE
A multimedia exhibition in Paris offers a rich flashback to a period between the 1920s and the 1970s when many female performers took center stage.
CONSORTIUM AIMS TO SAVE THE HONRESFIELD LIBRARY
Sotheby's has agreed to postpone a highly anticipated auction as a consortium tries to raise $21 million to acquire a lost private library for the British public.